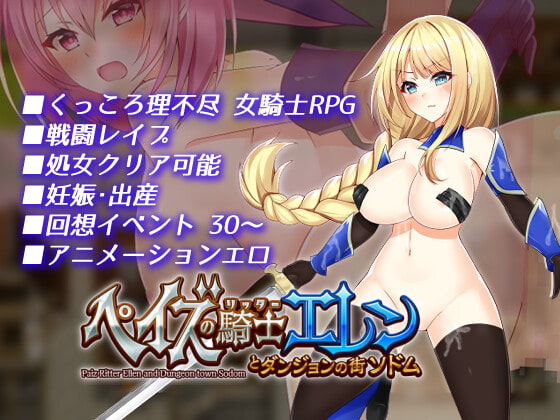 ■ A blonde, dignified and bullish female knight. Would you like to embarrass, insult, steal a refuge, hunt down, and conceive such a female knight?

Dungeon — It is the remains of the Demon King era. Infinite monsters spring up from there, but at the same time, “treasure” also springs up in the dungeon, so adventurers with a lot of money gather in the dungeon. And the city prospered around the dungeon.

“I can see the city over that hill.” — Ellen and Lilia whip their horses and try to run up the hill at once.
—–

(Recognized initial bug)
-When defeating a symbol encounter (small fish), the symbol does not disappear from time to time.-Defeating an
enemy and changing the area during the item drop production. The next time you return to that area, the drop effect will be performed again.
・ When I’m poisoned by my stomach, the graphic on the menu doesn’t work.

・ If I get pregnant during pregnancy, the latter is given priority (it’s a little unnatural, but I’m trying to make it a specification)
Example: I’m pregnant in a dungeon When I was raped in the city before giving birth and got a hit with a pregnancy roulette. Pregnancy in the city is prioritized for children.
・ If Ellen and Lilia are violated alternately and become pregnant, the parent’s name will not be entered correctly.