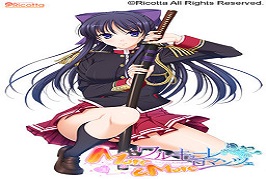 Fan disc of Walkure Romanze ~Shoujo Kishi Monogatari~ containing after stories for the 4 heroines of the original title, plus full routes for Bertille, Ayako, and Akane.

The world’s best knights gather at Winford Academy and it’s gotten quite lively with the jousting tournament nearing. Due to a misunderstanding, Takahiro’s osananajimi Mio was challenged by the proud Bertille to a match at the tournament. Since she hadn’t even rode on a horse before, he ended up guiding her to victory as a begleiter (knight’s assistant). With many watching the wonderful match, his skills as a begleiter were noticed by many students and they took quite an interest in him! However, he was unsure if he wanted to continue on as a begleiter or to return to being a knight. How will he fare in the both the arenas of jousting and love?